When you hear the words IE 8 or any derivative, you shudder at the thought of having to hack away at nice standards compliant code to get it to work. Unfortunately in an enterprise setting, you can’t just ignore the IE users. Microsoft has in-grained themselves in the big enterprises and IE is one of those staple products that you must support.

Today we (some other colleagues) learned that IE 8 running on Citrix, Windows Server 2003, does not like minified javascript. We had instances of it crashing/disconnecting the browser/session when attempting to invoke it inside an ExtJs application. Basically the ExtJs application has a hidden tab, that hits a standalone site, the standalone site contains uglify compressed code, whether its a processing limitation or a strictly IE behavior, we are unsure. we just know that if we don’t minify the code, it no longer crashes.

So beware of minify/compress on javascript if you wish to support IE 8. Also, if you are using grunt or uglify, make sure to turn on es3:true. 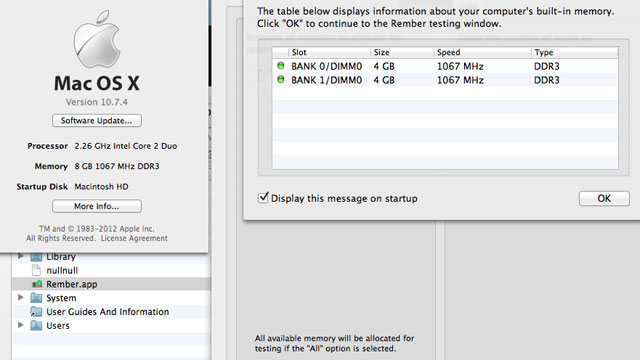 At first (running Snow Leopard OS X 10.6), it crashed every once in a while, but I figured that going to OS X Lion (10.7) would fix it. I was wrong. Lion seems to magnify all there is to these crashes. I would get the grey screen of death as well as applications randomly quitting. These issues seem to escalate as I kept updating from 10.7 to 10.7.2

As always, I thought it was the install of my Lion, as I had just updated on top of Snow Leopard, which on forums was said to be a bad practice.

Finally I got sick of my crashes and googled around and found this forum where they mentioned that it was Lion and its finicky-ness with bad memory. I had never thought that the memory would be the issue. here

I started my system in single user boot mode and ran the test. Unfortunately the forum describes the wrong procedure to run the test, I’ve included it below:

After removing my 8GB RAM and reinstalling my 2GB standard RAM, it seems to become more stable.